Dr. Sugar Singleton with San Juan Regional Medical Center’s Urgent Care Center offers some tips for dealing with the sniffles, sneezes and other symptoms that arise during allergy season.

Born and raised in Farmington, New Mexico, Dr. Sugar Singleton returned to her hometown to care for her community members as a physician at San Juan Health Partners Urgent Care facility. 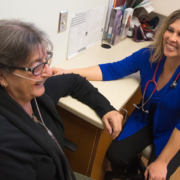 In the past year, Shermann “Sugar” Singleton, MD ’03, has taken time off from her small-town family practice clinic in Aztec, N.M., to travel to rural Kenya on a medical mission and serve on a team that flew into Puerto Rico to provide urgently needed care in the wake of Hurricane Maria.

Singleton attributes her devotion to service to her late mother, Helen Rodriguez Singleton, who was active in local politics and passionate about helping young Hispanic women get an education.

Her mother’s determination was contagious. “She gave them the belief that they could do it,” Singleton says. “My passion is more helping people to be well. The idea of being able to help people who don’t have access to medical care is intriguing to me.”

Growing up in Farmington, where her parents operated a mobile home business, Singleton was a top student. She wanted to be a doctor for as long as she can remember, but her path to an MD required an extra dose of determination.

In 1995, a month into her first year of medical school at UNM, Singleton learned that her mother had not had a Pap smear in more than 20 years. She urged her mother to get an exam, and it was soon discovered that she had uterine cancer that had spread to her lymph nodes.

Following surgery at the Mayo Clinic in Arizona, the prognosis was that she had two to four months to live. Singleton forbade the surgeons from sharing that prediction with her mother.

“I remember her looking into my eyes and saying, ‘Sugar, I know I have cancer, but I don’t want to know any more than that,” Singleton recalls. “She said, ‘You’re a doctor now – I want you to make all the decisions for me.’ I said, ‘Mom, there’s one thing I need to ask of you. I need you to believe you’re going to get better.’”

Her mother “never heard a doctor say that she had two to four months to live,” Singleton says. “Basically, I knew that was our only hope – to have hope.”

Singleton knew her mother needed skilled care and presented her dilemma to faculty member Bert Umland, MD. “He gave me very wise advice,” she says. He suggested that she take a leave from medical school to care for her mother.

Helen Singleton outlived her prognosis by nine years, undergoing rounds of chemotherapy, hormone therapy and more surgery while her daughter stayed nearby, raising a family and working in the family business. She died in 2004.

“It made me a much better doctor than I would have been otherwise,” Singleton says. “It taught me about the human spirit.”

Singleton returned to medical school in 1999 while her family remained in Farmington. She’d return home for the weekend, and then dread getting in the car for the drive back to Albuquerque.

“I’d have tears in my eyes and my husband would kiss me on the forehead and say, ‘You’ve got to get on the road,’” she says. “I’d cry halfway to Cuba, and then the tears would dry and I’d say, ‘We can get through this for one more week.’”

“They taught me about the kind of doctor I wanted to be,” she says. “There’s a lot more to being a good doctor than just knowing a lot about medicine.”

She had catching up to do after four years away from the program. “They did everything they could to support me and make a doctor out of me,” she says. “I had a lot of wind beneath my wings. When I graduated medical school, I thought, ‘This is really a group effort.’”

Espey, who at the time was clerkship director and is now chair of the Department of Obstetrics and Gynecology, remembers Singleton as “a star” among her peers.

“It was not easy for her to go back and forth to Farmington,” Espey says. “She never complained. She was always excited for clinical opportunities – upbeat and always concerned about the patient. It’s so inspirational to see her serving rural New Mexico.”

Singleton considered surgery, neurology, pediatrics, OB/GYN and family medicine. “I decided at the end the best mix of all that was to be a family doctor,” she says. After completing her family medicine residency in 2006, Singleton returned to the Four Corners to work in the San Juan Regional Medical Center Urgent Care clinic. She moved to the San Juan Health Partners Family Medicine Clinic in Aztec in 2012.

She treats a family from nearby Blanco, N.M., that spans six generations (the oldest members are in their 90s and the youngest a few months old). “It is the idea of what a family medical home was designed to be.”

Singleton encourages her patients to think of their interaction as a partnership. “My desire is to empower patients to be active in their own health,” she says. “That is much more my focus than to treat diseases.”

Singleton brought along that mindset on her trip to Kenya in March 2017. She was part of a 40-member medical team that saw patients in clinics all over the country. “It ran the gamut from sore throats to people who had end-stage cancer,” she says.

The resilience of people who lack access to the things that most Americans take for granted impressed her. “In Kenya, most of the people don’t have any medical care at all,” she says. “It really taught me the difference between happiness and joy.”

Last fall, when Hurricane Maria scored a direct hit on Puerto Rico, Singleton knew she had to act. She and her best friend, a Puerto Rico native, joined a medical team that spent 10 days on the island in December 2017.

They headed for rural areas that were cut off from electricity and running water, setting up impromptu clinics in community centers and even on a basketball court. “We were seeing about 300 patients a day,” she says.

Singleton has deep roots in the Four Corners: she has Anglo, Hispanic and Navajo ancestors. She thinks one day she may want to follow in her mother’s footsteps and venture into politics, but for now she’s focused on her medical career and sharing her vision of holistic health.

“The biggest thing I want to do is to make a difference,” she says. “I hope I do that in the lives of my patients.”